I am a graduate of the University of Cape Town (first degree and first postgraduate degree, 1980-83) and holder of a Masters and a doctorate from the School of Oriental and African Studies (SOAS) in London. I held a temporary lectureship in Comparative Politics at the University of Keele in 1987/88, before taking up a Lectureship in African History at Edinburgh. I was promoted to Reader in 2003 and Professor in 2005. I was the Director of the Centre of African Studies for ten years and was formerly co-Director of the Edinburgh International Development Centre.

Externally, I was the President of AEGIS, the Centre-based African Studies association in Europe between 2008 and 2015, As such, I have been intimately involved in the European African Studies scene. In 2014/15, I was a Fellow of the Stellenbosch Institute of Advanced Study (STIAS) working on a project on South African wine and global connectivity. Over 2015/16, I was privileged to be a Member of the Institute of Advanced Study (IAS) in Princeton, working on a comparison of borders and state-making in Ghana and Uganda.

I am the holder of the most prestigious European Research Council Advanced Grant (€2.5 million over 5 years) for a multi-regional comparative project entitled African Governance and Space: Transport Corridors, Border Towns and Port Cities in Transition (AFRIGOS). The project began in January 2016 and ends in 2020. See http://www.cas.ed.ac.uk/research/grants_and_projects/afrigos

I am also the PI for a new collaborative project funded by the British Academy, on Border Festivals, Dvided Communities and Practical Governance in West Africa. This is a collaboration with colleagues in Edinburgh (Jose-Maria Muñoz), the University of Ghana (Ntewusu Aniegye and Edem Adotey), l'Université de Lomé (Kokou Azamede), the University of Cagliari  (Isabella Soi) and George Washington University (Elaine Peña).

My current research interests lie, firstly, in the comparative history of West African borderlands. I have just completed a (very large!) monograph entitled Boundaries, Communities and State-Making in West Africa: The Centrality of the Margins which  will be published simultaneously in paperback and hardback by Cambridge University Press in July 2019. The book deals simultaneously with colonial state creation and the construction of ideas of community in the Senegambia and the trans-Volta. It is based on archival and field research in the Gambia, Senegal, Ghana, Togo, France and the UK. The study, which compares two Franco-British border zones deals with taxation and population control as factors that invested borders with varying levels of importance for the colonial states and their post-colonial successors. It also demonstrates how these impinged on structures of local administration, contraband, the shaping of land use practices and definitions of belonging . These varied significantly between the Senegambia and the trans-Volta regions. The AFRIGOS project represents a major new line of research which focuses on the governance effects of large-scale investments in infrastructure and the harmonization of Customs, Immigration and security across Africa. Apart from being the grantholder, I will carry out field research on the West African and East African case-studies. I am pleased to have worked on this project with Wolfgang Zeller, Jose-Maria Muñoz, Sidy Cissokho, Hugh Lamarque, Tim Zajontz, Isabella Soi (University of Cagliari) and Ellie Gambino (the PhD student for the project).

I was the initiator of the African Borderlands Research Network (ABORNE) which was funded by the European Science Foundation between 2009-2014, and I still chair its steering committee. In a more applied role, I have served as a resource person for the African Union Border Programme (AUBP) and signed an MOU with the latter on behalf of ABORNE in April 2011. I have been involved in discussions with the Economic Community of West African States (ECOWAS) on ways in which academic research might assist the latter's Cross-Border Cooperation agenda. This engagement with AUBP and ECOWAS was previously supported by a Knowledge Exchange Grant from the College of Humanities and Social Science.

Secondly, I have an ongoing interest in the history of post-colonial states, and Africa Since Independence entered its second edition in 2012. I am consulted from time to time by the policy community. I am engaged in ongoing research on electoral politics in Ghana, and served as a short-term election observer for the Carter Center in 2008. I also served on the latter's evaluation team which travelled to Ghana in 2012 and again in 2016 to assess the climate in the run-up to the polls.

Thirdly, since 2009, I have been engaged in researching a history of the Cape wine industry with the support of a Leverhulme Research Fellowship. The project entitled "Race, Taste and Power: The Cape Wine Industry" combines a history of (stalled) innovations in the industry with an analysis of the role of racialised discourses and practices in shaping wine consumption patterns and vice versa. The project spans the twentieth century. In 2012 and 2013, I was a Fellow of the Stellenbosch Institute of Advanced Study (STIAS) to work on a project entitled "Wine, Temperance and South African Connectivity, c.1900 to the Present".

For a contribution to the debate about the ban on alcohol sales and exports under COVID lockdown, listen to the 'Money Show' on South African Radio 702:

With effect from September 2018, I will serve an member of the advisory board of the newly-established Merian Institute for Advanced Studies Africa (MIASA) located at the University of Ghana. I previously served as a member of the international advisory board advising the German Research Council Priority Programme on "Adaptation and Creativity in Africa: Technologies and Significations in the Production of Order and Disorder”. I have also been an advisor to a project financed by the National Research Fund of Luxembourg entitled "Informal Trade and Cross-Border Integration in West Africa (CROSSTRADE)". I am currently a member of the external advisory board for the Global South Studies Centre (GSSC) in Koln. And from the end of 2018, I will serve on the advistory board for a project funded by the Danish Ministry of Foreign Affairs enitled "Domestic Security Implications of UN Peacekeeping (D-SIP)".

I have also served on research evaluation panels for the German DFG and the Volkswagen Foundation. In 2017, I was a member of the DFG (German Research Council) panel evaluating Clusters of Excellence bids. Closer to home, I have participated as a member of the Philip Leverhulme Prize Committee for History. Finally, I was member of the UK Research Excellence Framework (REF) panel for History in 2014 and will serve again in this capacity in 2021. Formerly, I was an elected council member of the Royal African Society.

I was the co-editor of the Journal of Modern African Studies (Cambridge University Press) from September 2012 until September 2017, alongside Leo Villalón. I have since joined the editorial board of JMAS. I am also a member of the  boards of Afriche e Orienti, Revista Africana Studia, Africa Spectrum, Journal of Borderlands Studies, Transactions of the Historical Society of Ghana, Journal of African Peace and Security, Africa (Roma), and Africa Review. I was a founding co-editor of the African Borderlands book series published by Palgrave Macmillan.

I have supervised 27 successful PhD projects and am currently supervising the following students :

I was previously external examiner for the History Tripos at the University of Cambridge and for the Masters in African Studies in Oxford.

Race, Taste and the Grape in South Africa: The Cape Wine Industry in a Global Context (2021)

'Nationalism and decolonization in the Gold Coast' (book chapter)

'When is a corridor just a road? Understanding thwarted ambitions along the Abidjan-Lagos Corridor' (book chapter)

'Seeing the trees for the wood:  the environmental and human consequences of partition in the Senegambian borderlands', in Werner Zips and Manuela Zips-Maritsch (ed.), The Economy of Conservation: Livings Museums and Community-Based Development in African Borderlands  (Lit Verlag, 2019).

'The future of states in Africa: prospects for the reordering of space and the remaking of bureaucracies' in "Multiple Futures - Africa, China, Europe", special issue of Comparativ 26, 2, 2016, pp.75-91.

'Modernity, tradition and intoxication: comparative lessons from South Africa and West Africa",  in Phil Withington and Angela McShane (eds.), Cultures of Intoxication, Past and Present Supplement 9, 2014. 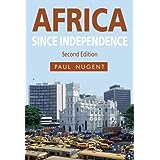 'Do nations have stomachs? Food, drink and imagined community in Africa', Africa Spectrum 3, 2010.

'Nkrumah and Rawlings: political lives in parallel?', Transactions of the Historical Society of Ghana 12, 2009-2010.

'The Historicity of Ethnicity: Mandinka/Jola and Ewe/Agotime identities in the nineteenth and twentieth centuries', in Alexander Keese (ed.) Ethnicity and the Long-Term Perspective. Boston & Berne: Peter Lang, 2010.

'Putting the history back into ethnicity: enslavement, religion and cultural brokerage in the construction of Mandinka/Jola and Ewe/Agotime identities in West Africa, c.1650-1930', Comparative Studies in Society and History 50 (4) (2008) 920-948.

'Not so much boom towns as trickle towns:  a comparison of  two West African border towns, Kpetoe (Ghana)  and Darsilami (the Gambia)', in Yomi Akinyeye (ed.), That They May Be One: African Boundaries and Regional Integration - Essays in Honour of Professor Anthony I. Asiwaju. Imeko: African Regional Institute, 2008.

'Border anomalies: the role of local actors in shaping spaces along the Gambia-Senegal and Ghana-Togo borders' in Alice Bellagamaba and Georg Klute (eds.), Beside the State: Emergent Powers in Contemporary Africa. Cologne: Rudiger Koppe Verlag, 2008.

‘Borderland identities in comparative perspective: chieftaincy, religion and belonging along the Ghana-Togo and Senegal-Gambia borders’, in Per Hernaes (ed.), The Role of Tradition and Modernity in African Political Cultures and Urban Conflicts: The Case of Ghana in Comparative Perspective. Trondheim University of Science and Technology, 2005.

'A regional melting-pot: the Ewe and their neighbours in the Ghana-Togo borderlands’, in Benjamin Lawrance et al. (eds.), The Ewes of Togo and Benin. Accra: Woeli, 2004.

Smugglers, Secessionists and Loyal Citizens of the Ghana-Togo Frontier: The Lie of the Borderlands Since 1914 . James Currey, Ohio University Press and Sub-Saharan Publishers, 2003.

'The things that money can buy: chieftaincy, the media and the 1996 elections in Hohoe-North constituency’, Ghana Studies, 4 (2001).

Co-editor (with Carola Lentz) of Ethnicity in Ghana: The Limits of Invention. Macmillan & St Martin's Press, 2000.

‘“A few lesser peoples”: The Central Togo minorities and their Ewe neighbours’, in Carola Lentz and Paul Nugent (eds.), Ethnicity in Ghana: The Limits of Invention. Macmillan & St. Martin's Press, 2000.

I also maintain a blog on wine and borders: http://bordersandwine.wordpress.com/

For an interesting discovery of the link between wine and jazz, see:http://electricjive.blogspot.com/2011/03/jazz-royalty-swinging-bittersweet.html

(Me and Boland Coetzee)

I am interested in supervising topics related to borderlands (the history of African borders and contemporary border dynamics); regional integration; consumption more broadly and alcohol quite specifically; African politics (especially West Africa); African cities and on popular culture. I am also happy enough to supervise students in the area of imperial and colonial history with specific reference to Africa. Topics of a comparative nature are especially welcome.

If you are interested in being supervised by Paul Nugent, please see the links below for more information: